Two posts ago, I talked about my setup for automatically showing popups next to links to disambiguation pages. That entire structure relies on my previously-written “popup content” framework, so this time we’ll discuss that.

Here’s an example of a static popup:

And here’s an example of a lazily-loaded popup: 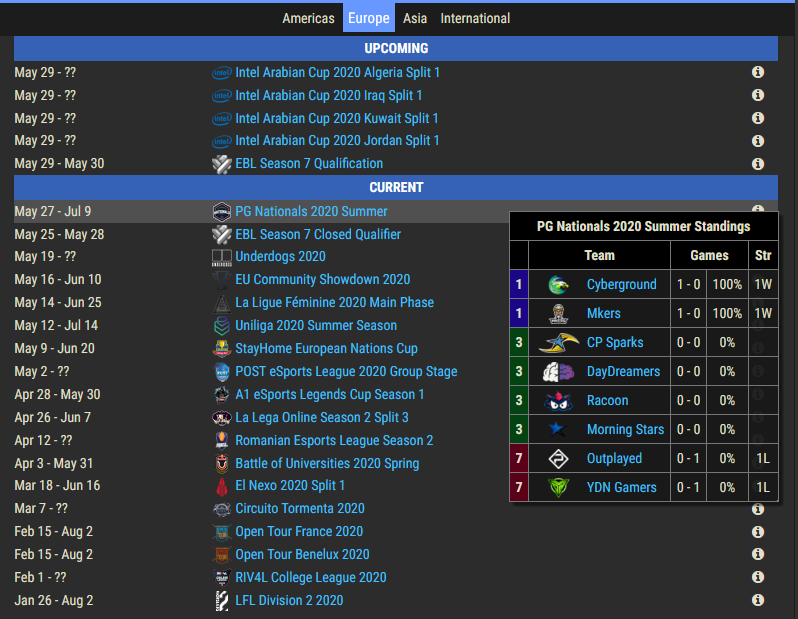 (Note: All code in this post was originally written by me with CSS help from Ema for Leaguepedia and is licensed under CC BY-SA 3.0.)

Click here to skip this section; none of the code mentioned here is current.

The first popup content I displayed on the wiki was called “tournament-team history,” and it showed a single team’s schedule of games from a tournament inside of a pop-up available in tournament results sections. If you were on SK Telecom T1’s page and clicked the “tth” pop-up in the LCK 2019 Summer row, you’d see a table showing all of SK Telecom T1’s games during Worlds 2019: 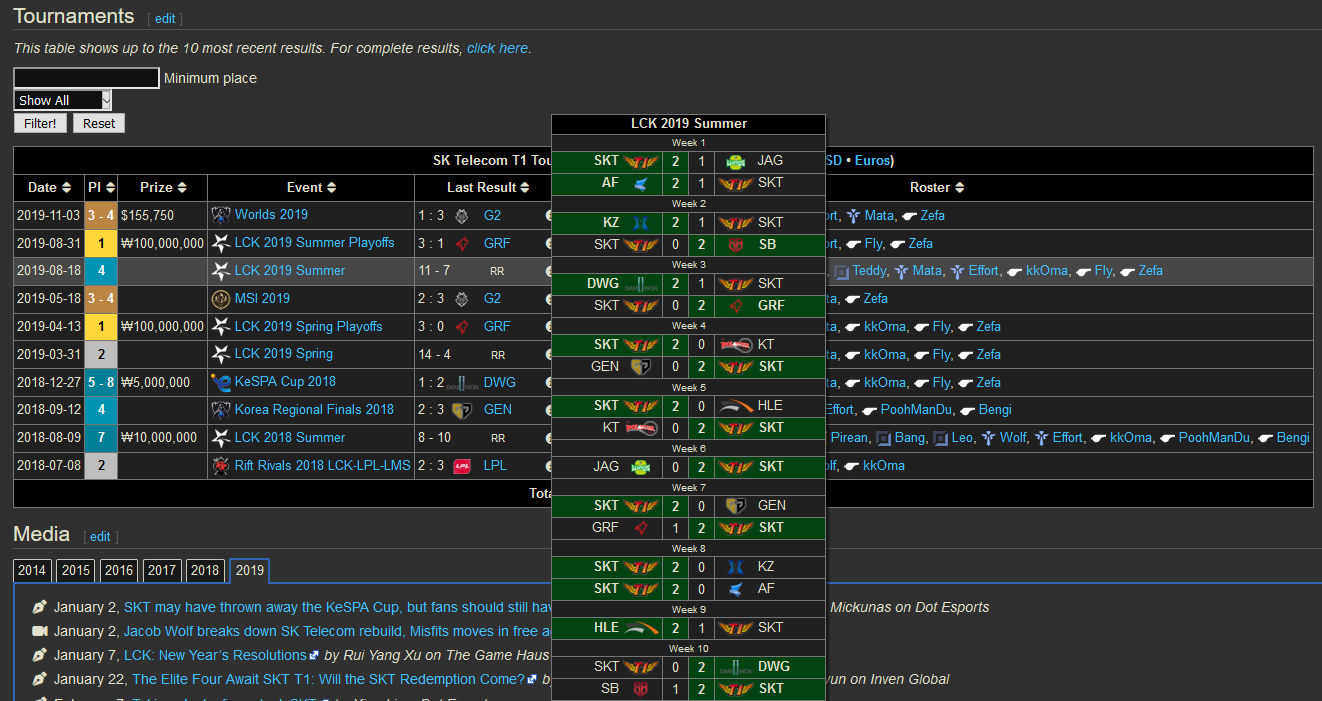 I wrote this implementation in January 2019, around when I was finishing my tournament data project. At the time, I made everything with non-specific class names in CSS, but there wasn’t really any general-case Lua. Over time I started creating more and more instances of pop-up content, and the demands I had of the system grew. I gradually refactored and redesigned, and about a year after I first created my tournament-team history toggle, I’d deleted all of its code completely, replaced with calls to general-case toggle functionality.

At the time, I didn’t yet know the “hack” of wrapping the entire gadget in commented <nowiki></nowiki> tags to avoid script errors, wanted templates/categories, etc.

Note the unfortunate hard-coding of wikitext to feed to the parse api in this function.

Here’s the Lua that created the HTML (later on I’ll include examples of generated HTML as well, but since this code isn’t live anymore, I don’t have that here):

Like I mentioned in the JS section, there’s no data attributes indicating the code that should be run by the parse command, so that’s hard-coded into the JS, resulting in a bad separation of information. And the “action” class names added here are all specific to this one setting; I was using the generic .popup-button to create the display but TTH-specific classes for the JS. As I created more and more code using these, this quickly became a problematic approach not just in theory but also in practice; many different popups needed to be able to load content lazily, and the content to display was always different.

At the end of January 2019, I added a new section to Module:PopupButton:

As soon as I created this separate function (and its corresponding JS, which was basically a copy-paste of the TTH JS), I knew I’d need to abstract and make something generic.

I’ll now give up on the historical aspect (it took a lot of checking version history and reading my 2019 dev blog notes to reconstruct the first section), and talk about my current approach.

One issue that arose early on was that I had needed classes for CSS that were also used in my JavaScript, so if I wanted to reuse CSS, I was necessarily reusing JS as well. But I want to have a range of available behaviors for my pop-ups, so this was a problem. My solution was to redo all my classes and split them so that every element had two: one with a suffix of -pretty, which was used exclusively for CSS, and one with a suffix of -action, used for JS.

If a non-default behavior - such as lazy loading - is desired, the standard -action classes can just not be added, by calling p.popupButtonPretty directly.

Here’s the resulting module code to build the HTML. In both cases, a table of HTML objects is returned so that additional classes can be added as needed. (There’s a third case shown later on for lazy loading)

Here’s the generated HTML for a simple pop-up. This is part of a navbox. (The comments are mine and edited in for this post, not generated by the wiki.)

In the above Lua, you might be wondering, what’s with the .popup-content-inner and popup-content-wrapper nodes both being there? Shouldn’t I just have a single absolutely-positioned div inside of the button span?

The problem with having only two layers is max width. Because of the absolute positioning of .popup-content-wrapper-pretty within .popup-button-pretty, the content inside of .popup-inner-pretty is made as small a width as possible. This results in one of the three cases being guaranteed to happen:

I didn’t like any of those options. So what I did was to create an artificial max-width property myself in the following way:

This process is executed in the following code:

While this seems like a pretty straightforward thing to do, at the time it took me and Ema many, many hours of experimentation and failure, spread over several months, to come up with the idea to do it this way. And even after we came up with this solution, it still needed multiple tweaks before it worked correctly everywhere. But as of writing this post, the implementation shown here has been stable for about six months, so I think we finally got it right.

Positioning within the window

If a pop-up is going to “spill over” the edge of its containing element (which could be the window), we need to adjust its position. By default, we’ve been printing these so that the upper-left corner is located at the center of the button, but walls can shift this up or left, all the way up to the point at which it’s tangent to the edge of its container on either the top or left wall; at that point, the remaining spill-over is allowed.

Like the max-width fix, I wrote this code over a period of several months, but this was much less of an ordeal because there was never a case of not knowing even the general idea of an approach to fix any issue; the challenge was simply implementing fixes correctly. Here were some of the issues I encountered:

When I started writing this section I realized anything I might say about how it works should in fact be a comment directly in the code. So, see comments for what it does:

There’s a bunch of extra CSS beyond this in the gadget, but this is the styling common to all popups, though of course sometimes part of this may be overridden, particularly the choice of FontAwesome icon for the button. You’ll also see here a comment restating the explanation above of why I have both the wrapper and inner elements. The full code in this gadget at the time of writing is provided at the end of the post.

You can see the live version of this code at MediaWiki:Gadget-popups.css on Leaguepedia. Note the use of css variables for every color; this is how we support both light and dark skins at the same time.

The process has two steps:

Since this reduces to a case of normal pop-ups in the end, there’s no new CSS to discuss here. As above, we’ll first look at the HTML and its generation, and then the JS code.

As you can see, there’s no content inside of the inner div currently. The text that will be run by the wiki later is provided as the attribute data-parse-text on the button.

This code is part of the same Module:ToggleUtil shown above, and reuses the funtion p.popupButtonPretty(). You can see the full code at the end of this post.

We start by removing any event handler on the button in case a hook is re-fired at some point on the page; without this removal, we’d end up with two duplicate event handlers on click action. Both would happen, resulting in two API queries, the content added and replaced, and then the button being clicked twice - i.e. shown and then re-hidden, and in fact nothing visible to the user happens. Maybe this isn’t the cleanest solution to this issue, but it works.

This is also a good thing to remember when debugging - if your click event that’s supposed to toggle show-hide looks like it is doing nothing, and you’re getting no errors, inspect the element and see how many click event handlers it has assigned! If it’s even, there’s a good chance you’re firing some hook a second (or further) time and rebinding the same event twice.

That’s it! The disambiguation pop-ups are “just” a special case of this, with also a bit of extra code to maintain the functionality of the ::after click and maintaining visual consistency when the ::after is replaced with a separate node.