How to add Cargo docstrings on table pages

The following structure follows this layout:

But since we want to include a description as well, we’ll adjust to have multiple values associated to each key:

And since the order of parameters in #cargo_declare is important (so we can control the order of fields), we might prefer like so:

But typing out order is kind of annoying, so we’ll tweak one more time and instead of returning key-value pairs to access using pairs() we’ll create an ordered list of tables to access using ipairs(). Here’s the final format, with a few extra rows included:

Note that the final transition we did isn’t necessarily the best way to organize data - suppose, for example, that we want to reuse these declarations as a way to automatically add typing to fields when querying them; in this case, accessing via key would be more convenient than iterating through an array using ipairs. But since queries are expensive to do, we won’t be doing many per page, so it’s not a big problem to restructure the table dynamically as needed (probably into an ordered dictionary), and that will be done inside of a wrapper anyway, so we won’t be increasing complexity. The most common use case for accessing these fields is going to be to adjust or create new declarations, so we want that to be very easy to interact with.

The important thing to note about what we’ve done so far is that none of this depends on the fact that we’ll be using an unsupported method of attaching docstrings to table fields. If the syntax for #cargo_declare included a syntax for specifying a description, our table layout would be exactly the same. This is important for two reasons:

Now we have decided how we want to write our declarations, but there’s no code yet to actually do anything. Let’s change that.

The following snippet is originally found at Module:CargoDeclare.

There’s some additional make-it-available-from-wikitext wrapping to fetch args from frame as well as the definition of util_map.inPlace() (it does what you’d guess) but this is pretty much all that’s needed for the declaration to work.

Beyond that, there’s two places I want docstrings available. The first is on the actual Cargo Declare template page, as a table (additional examples in use can be seen here): 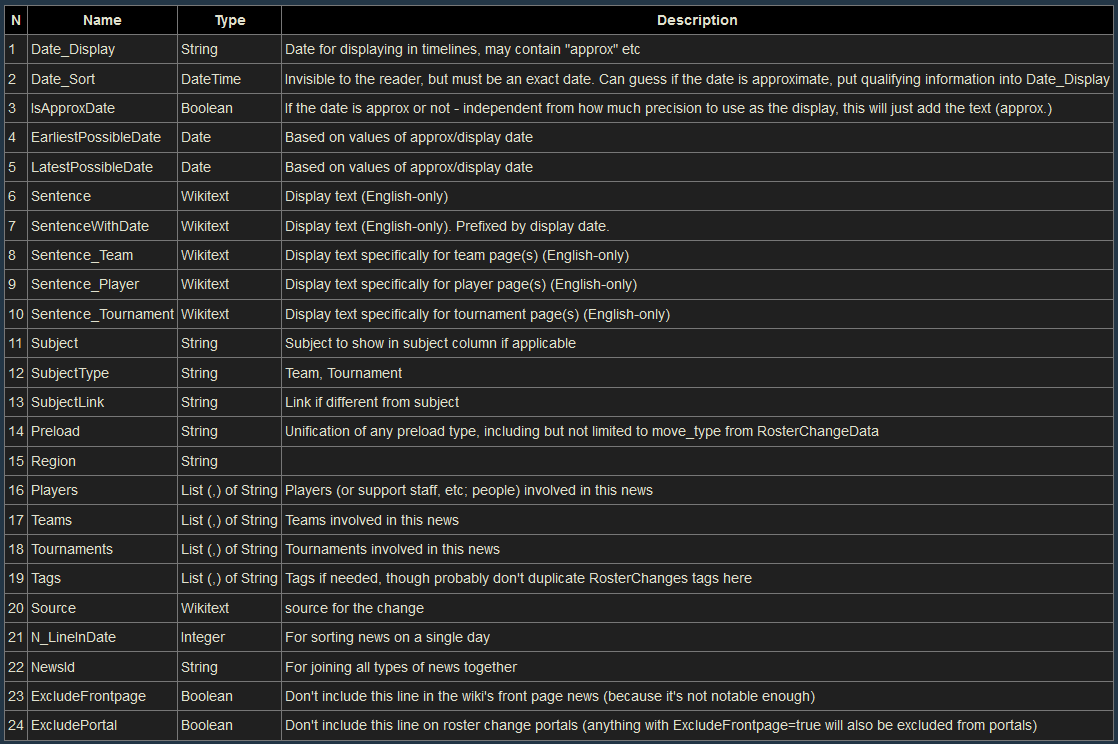 And code to generate this:

The second is on the actual Cargo table page (additional examples in use here): 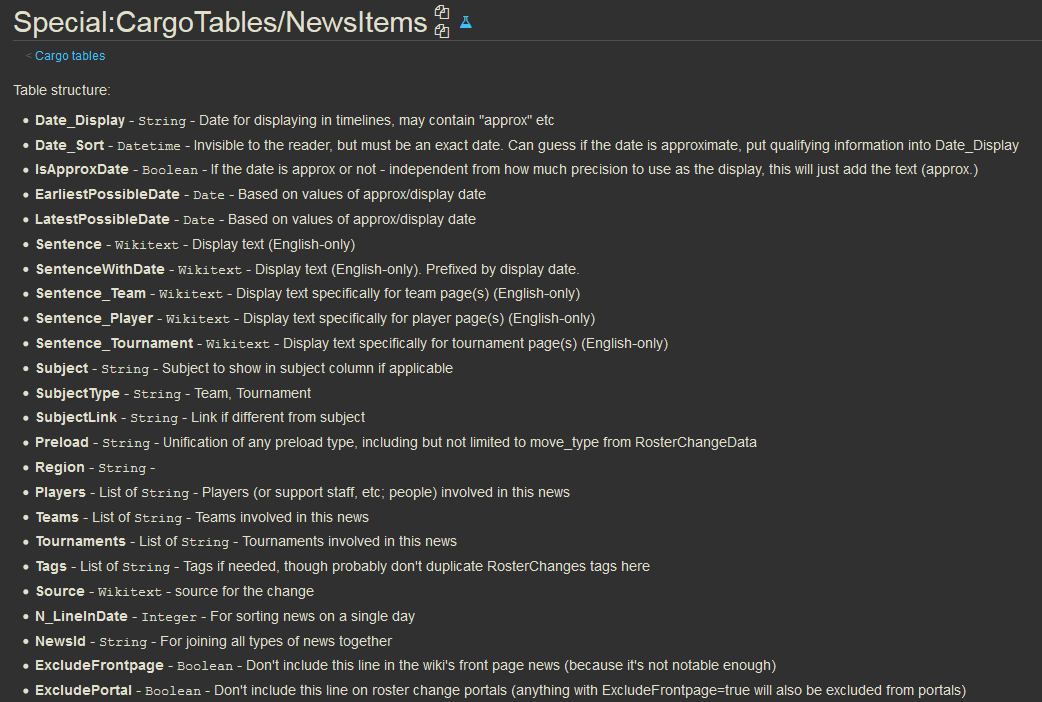 This part is a bit tricker since we can’t actually control creation of this page, and here’s where the “random hack” part of this entire thing comes in. Here’s the JavaScript code:

In our CargoDeclare module, we have the following:

This will give us the ;;;-separated list of parameters that we can add to the table. Probably the worst part of this (other than the fact that we’re doing it in the first place?) is the selector at the start since Cargo doesn’t provide any class names for us to use. But as you can see, the only code we’d have to actively change in the event of Cargo changing is contained in this one JavaScript snippet - there’s some Lua too, but that could in theory just stick around and be unused. Crucially, none of the places we are adding table definitions will have to be updated.

And we’ve done so in a way that’s nicely encapsulated and can be easily changed at any point in time if needed!