This post doesn’t have a particular goal in mind - I just wanted to write about the evolution of a Lua module that went through a large number of iterations in July.

I have a bunch of infrastructure on my wiki related to taking user input, validating it against a set of recognized keys, returning a set of values, and then printing an appropriate display along with maybe an image (which may be either a sprite or a file).

Here’s a snippet from the settings file for displaying roles:

As this example shows, if you type b for a role, and the “length” to display is short, the wiki will print Bot. If the “length” is the role key, then the wiki will print Bot Laner. Up until recently, we had a store “length” used for Cargo tables, which used the legacy name AD Carry - in the time since I started writing this post and when I finished it, I changed everything to use Bot instead, even internally. This is relevant later.

There’s a bunch of these modules - one for champions, one for teams, one for countries/flags/nationalities, even one for gender pronouns.

An object-oriented approach to these display modules is appropriate since they are able to inherit a significant amount of behavior but do require some degree of polymorphism - for example, roles require a “modifier” - a player could be a “substitute bot laner” or “trainee bot laner,” a concept that doesn’t exist for a champion (a playable character in the game League of Legends).

If the input a user gives isn’t recognized, the default behavior also differs - for a role input, we might assume this is an unrecognized “support staff” role, whereas for a champion or country we’ll error, assuming that our list of recognized inputs is definitive.

Until very recently, I hadn’t used an object-oriented approach, though, and as of writing this article I’m still not completely done migrating to using one - my Team display module is still using an older method, though everything else is now migrated. The approach has evolved over time; originally there was no Lua involved, and there were a bunch of #switch statements in wikitext code; initial implementations in Lua were 1:1 translations of this approach, which I slowly morphed over time. Currently I have an EntityAbstract which I subclass.

Collectively I refer to these modules as “markup entities” or just “entities,” and Role is by far the most complicated because a role isn’t actually a well-defined entity, but in the past it’s always been treated as one, with worse and worse workarounds over the years. 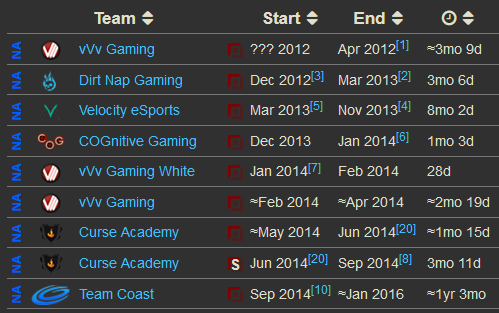 Role has several meanings depending on context:

The situation is more complicated than it seems, however. In the last scenario, a player could have more than one role at the same time, as shown in the following screenshot:

This screenshot would not have been possible two months ago; instead of recognizing that “support;manager” was in fact a list of two roles (or a “Compound Role” as the title of this article might suggest), it only knew how to replace the ; with a / to make it slightly more visually appealing (I did mention shitty workarounds) and then treat it as “random poorly-defined non-player role.”

(It was a bit worse - remember in the background I said that my internal database used to normalize the bot lane role as AD Carry? Yeah so it was printing as AD Carry/Manager even though this term was never supposed to be user-facing. Whoops.)

As you may have guessed, one of the many major changes I made to the system for Role specifically was to add a new type: CompoundRole. This type is basically just a list of Roles, but its introduction means that any time I’m printing or dealing with something that might be a list of roles, I don’t have to worry about whether the thing is a list or not; I can just instantiate a CompoundRole instead of a Role and be done with it.

There’s one major limitation to the CompoundRole behavior I get for “free” from CompoundEntityAbstract: Frequently, I require the ability first to filter roles by whether they are ingame positions or not and then apply some method to them. This filtering behavior is completely unique to role and has no analog in any similar Entity. How to deal with this? I went through several iterations.

For a time, my init looked roughly like this:

And then I had some other methods like this:

But I realized, this kind of sucks, I already have methods called :images() and :names(), wouldn’t it be nicer if I could call something like .staff.:names() instead of having to write separate methods for each way to filter like this? I should be creating new objects when I filter to staff roles or ingame roles, not just lists that I’m unable to work with.

So my next solution was to introduce a second new type, called RoleSet, that could do precisely this:

There were just too many cases of not-type-safe code, and using this approach would have required too much refactoring to make work. For example, team rosters are certainly ingame-only CompoundRoles, but they can also store to news. If news expects a RoleSet but TeamRoster is dealing with CompoundRole then I needed a different constructor that could create a RoleSet from a CompoundRole instead of from a string, or I needed to preserve my string args and create first a CompoundRole in my TeamRoster code and later a RoleSet in my News code, or just deal with RoleSets always, but then I’m always dealing with RoleSets, and that’s annoying, and the whole thing was annoying, and the entire point was to not be annoying.

This also seemed like a problem to serialize and deserialize from Cargo: Was I going to make everything into a RoleSet when I store in Cargo? If so, that’s a rather complicated serialize-deserialize process, since I need at least two distinct separators (one to separate roles from each other, and another to separate ingame from not-ingame). And if I’m not doing this then I’m not preserving types before and after queries, and that sucks, and I really just didn’t want this extra type to deal with.

Back to the constructor

The next thing I tried was something like this:

The opts.alreadyCast stops this from being an infinite loop (whoops, I forgot to do that at first), and now I can call things like role.ingame:images(). But in addition to just feeling kind of clunky and gross, this is also a lot of extra computation that I frequently don’t need to do - probably 80% of the time that I instantiate a CompoundRole, I don’t actually need to do any ingame/staff filtering.

So then I thought, okay, what if I go back to having a second type, but this time, what if I make it subclass CompoundRole? That fixes some of the problems I had before, because now it inherits the methods it needs. This way if I don’t need to create the ingame/staff filters I won’t, but I still keep the methods I need.

Finally I changed to the method (haha) that I’m using now, and this has been in place for over a month, and I’ve successfully migrated all of my code to use it, so I think it’s safe to say it’s final: I deleted CompoundRoleSet and went back to having the filters in CompoundRole, but now they are available as methods, not part of the init:

Any time a filter is requested, the code first checks to see if a filter has been previously performed, If so, it returns the value computed. If not, then it computes all possible filtered values, saves them all, and returns the one you want. So the syntax looks like role:ingame():images(), etc. Infinite looping is “possible” but checks aren’t needed since everything needs to be actively called by external logic.

I ended up renaming CompoundRole to RoleList along the way - at some point I realized that this was a more accurate name for all of these modules. This blog post is still called CompoundRole because for the entirety of the development process discussed here, I was intending to call it CompoundRole and also because I wrote most of the post before I renamed it. Also I think CompoundRole sounds cooler than RoleList even if RoleList is a clearer, more descriptive, and better name.

Here is the current full code of Module:RoleList, and you can find the module here:

As a bonus, here’s also the current code of Module:Role, and the module is here: