A stunning opening to a modern urban fantasy trilogy with deep worldbuilding, Jade City follows the saga of the No Peak clan vs the Mountain clan (haha, get it? it took me an embarrassingly long time to get it). Themes include the rise of globalism, being an outsider, the costs of showing mercy, government corruption, traditionalism, stigma and self-hatred, self-discovery, prejudice, love, different ways to show bravery, family obligations and their costs, loyalty, and so much more. It’s also about superpowered marshal artist gang leaders who ride around in fancy cars and beat people up in breathtaking action sequences.

Few novels are able to score highly on characterization, world-building, and plot all at the same time, for the simple reason that there’s just not enough space to do all three at the same time while maintaining proper pacing. Somehow, Jade City accomplishes just this. The magic system is intriguing, the world is engaging on both a local and geopolitical scale, and I’m invested in the future of the nation Kekon. I feel personally connected to the lives of each of the Kauls, each for a different reason. Their strengths and weaknesses are real, and I want so much for them to succeed - and for their enemies to be brought down. Painfully. By superpowered marshal artist gang leaders.

The only reason I took off a half-star is that the start of the book felt slow - but if I’m being honest, with a scope as ambitious as Jade City’s, and only 560 pages to tell it in, that’s hardly a reasonable complaint, so perhaps this says more about me than it does about the book. Indeed, at the time (I’m writing this review about a month after reading it, but before reading any further in the trilogy), I was three books into the Cradle series, and didn’t realize just quite how invested I was in Cradle, which was probably the worst possible time to read anything other than all of the available Cradle novels - which is exactly what I did after I finished Jade City. 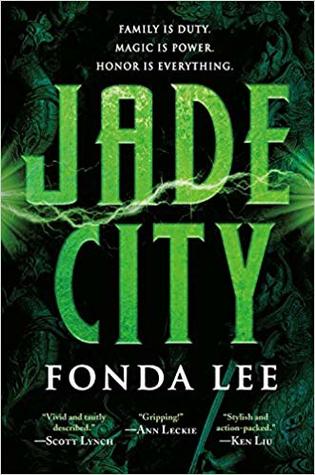