"An Alchemy of Masques and Mirrors" review

Title: An Alchemy of Masques and Mirrors

Recommend: I loved it, but it’s not for everyone

An Alchemy of Masques and Mirrors is most definitely not set on Earth and most definitely does not take place in France and Spain but with magic. Instead, it takes place in a completely unrecognizable world in which the continents are actually floating in the skies, and instead of boats that float in the water, there are skyships that fly in the gas clouds. So how could it possibly take place in France and Spain!

Our protagonist, Isabelle, grows up in l’Empire Céleste (see, that looks nothing like “France”) until she moves to Aragoth (clearly not Spain), under the watchful eye of Royal musketeer Jean-Claude. They have the most wonderful father-figure-daughter relationship of any fantasy novel I can remember, and he helps to protect her from three major cruelties of the world. First, her family totally sucks. Second, she has no magic (most people in her family do) and also has a physical disfigurement from birth. And third, this world seriously sucks towards women.

If you are not okay with fantasy worlds that seriously suck towards women, this book is not for you.

However, Isabelle is is goddamn awesome, and while the world sucks towards women, the story does not, and there are many, many, many fantasy novels set in much kinder worlds that suck way more when it comes to treating women protagonists well.

Speaking of the story, this story is incredible. Once we’ve established our very cool characters, setting, and magic, we’re caught up in a non-stop whirlwind of political intrigue with twists and turns and then more twists and turns, followed by some surprises, then additional shocking events (I’ll have you know that I predicted exactly one of them*). The plot is seriously non-stop with no room to breathe whatsoever. I LOVED IT! However, if that doesn’t sound enjoyable, you’ll totally hate this book. Stay away from it; there’ll be nothing enjoyable about it for you. But my god, I loved it.

The magic system is also pretty cool. Each house has its own set of abilities: sorry, l’Empire Céleste’s power has to do with bloodshadows and long-distance communication through bloodhollows. Aragoth’s power lets people create espejismos (note the similarity to the Spanish espejo) and send reflections of themselves through mirrors.

There’s also some science fantasy - Isabelle studies properties of the aether in addition to mathematics (she actually also agreeably articulates alliterations with Jean-Claude) (did I mention, best father-figure-daughter relationship in fantasy). And it’s technology that permits the travel between continents. All very steampunk. All a very, very fun book that I highly recommend. If you like this sort of thing.

(Below the cover is a huge plot spoiler!!!) 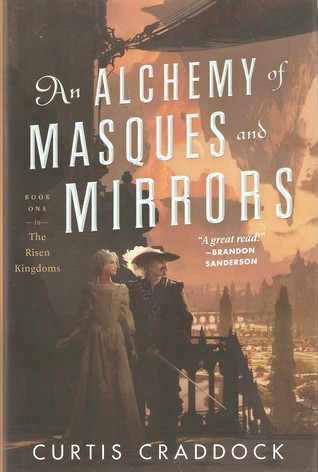 *The one that I saw coming was that “DuJournal” was actually Alejandro, which I predicted IMMEDIATELY when we saw him at the ball. Absolutely everything else caught me by surprise. Well, I guess I figured that Kantelvar cut off her arm, but I think we were supposed to know that.