"The Empress of Salt and Fortune" review

Title: The Empress of Salt and Fortune

Recommend: Yes - it’s not the best, but it’s an enjoyable, quick read

When we hear the costs paid by royalty, by “main characters,” what about the costs paid by those that serve? In-yo is sent from the north to become empress, and she is all alone in an unfamiliar kingdom. She has to give up everything of her past life to serve her country. But this story is not about her, necessarily; it’s about servant-turned-handmaiden Rabbit, who has to sacrifice even more, all for In-yo.

Chih is a cleric sent to gather stories. (They’re also nonbinary and they have a talking, magical bird named Almost Brilliant.) They’ve come to find stories about In-yo after the empress’s death, and they’re here to interview Rabbit; the novella is Rabbit telling Chih the story of In-yo’s life.

The Empress of Salt and Fortune is a layered story within a story. The narrative told is simple; it has to be, with only 112 pages and a framing layer taking up half of that. But within this small a space it still manages to captivate and surprise. It’s a lovely novella that you can easily read in a day, and while there’s a sequel (and I believe a planned five eventual works in the series) this novella can be read standalone. 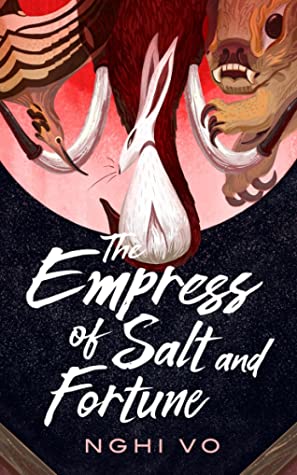