Sublime HQ have announced the release of Sublime Text 4! Yay!

You can follow that announcement link to see the full official changelog, and I’ll also highlight my own specific points of interest.

LSP servers such as LSP-lua are now a lot easier to install!

First install LSP from Package Control (linked above), then git clone the LSP-lua server into your User Packages folder in app data, and follow the README steps from the repo. That’s it.

Unfortunately, LSP-lua does not work with Mediawiker - it requires your files to be saved locally, and Mediawiker doesn’t do that. However, if you’re editing a particularly complicated module, you could save a local copy of it and get the benefits of LSP-lua.

I tried this out when figuring out how to approach my WIP thing, and decided not to use LSP as part of the solution. But LSP is very cool, and I really like it. But yeah the local-filesystem thing doesn’t really work with Mediawiker.

Other points of interest

You should read the entire changelog yourself - there’s a lot of cool stuff - but here’s a couple more things I found noteworthy when reading it just now.

You can copy paste this into your user Preferences.sublime_settings file: "caret_style": "smooth",. Having a non-blinking cursor seems weird to me but idk maybe you will like it.

Added a New Tab button in the tab bar, and hide_new_tab_button setting

I’d turn this off; I always press ctrl+N to make a new document, and hspace is precious. But if you like to click things, it’s a nice button.

Window title bar can be controlled by show_rel_path and show_project_first settings 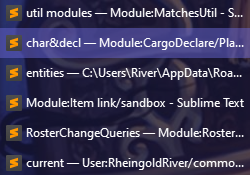 You should most definitely enable show_project_first; this removes the need for the package SetWindowTitle which I used to use to mimic the behavior now provided natively via this setting. They behave exactly identically. Cool!

(Note that the 4th window in the above screenshot doesn’t have a saved project, that’s why there’s just a file name.)

Sounds cool, can’t wait to get even more tilted at my highlighting errors (no actually, sounds cool)

I’ve been using the beta for about six weeks or so now, and I haven’t experienced any issues with it - in fact, I uninstalled Sublime Text 3 a few weeks ago so that Windows would stop opening anything in the older version of the editor, because everything was working so well. I’ve also been tinkering with a few of the extensions I use that didn’t do precisely what I want them to do, and that’s been a lot of fun.

And like I said, I have a WIP thing. I’ve been talking about it in the Fandom/Gamepedia Discord. I hope I actually finish it lol.