A “bot password” is a method of authentication that you can use to log into the MediaWiki API. If you want to read technical manuals, read those three links instead of this blog post; I’m going to take a non-technical approach here (!).

If this is a non-technical article, but also not a brief tutorial, then who is it for? This is intended for anyone who has to work with bot passwords frequently and occasionally feels like they are just reciting the components of working with one, rather than really understanding each part, or falters when trying to explain it to someone else.

This article is rather indepth for what should maybe be a very brief and simple concept, but I think the terms are so poorly named in MediaWiki that a full explanation is warranted to prevent any lingering confusion that could lead to mistaken beliefs. Also, a deep understanding is the best way to remove a need for easily-forgotten memorization, so I think the detail here is appropriate.

Note: I’ve previously contributed to the Gamepedia help wiki page about bot passwords, and some of the content here will overlap with content there (at least at the time of publication).

Thus, a bot password is a way to tell the MediaWiki API who you are without using your actual account’s credentials. If you go to Special:BotPasswords while logged into any wiki on a version of MediaWiki at least as recent as 1.27, you will be given the opportunity to create, edit, or delete any bot passwords you might want.

Later on we’ll elaborate on the last point extensively. 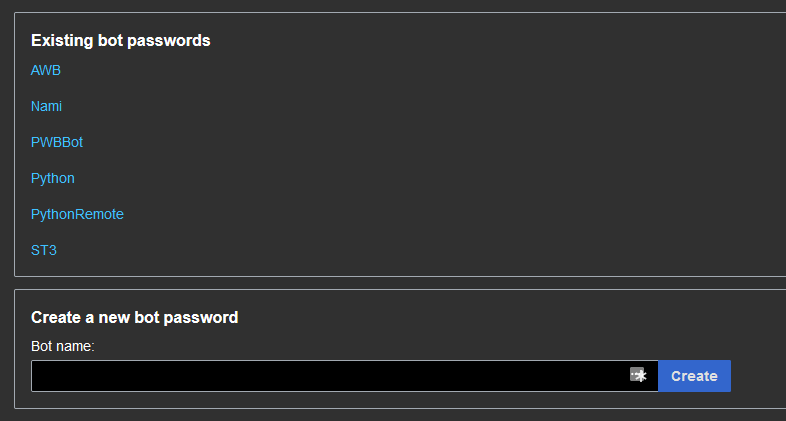 As you can see, there is no sensitive information here. The actually secret part, the token part, is available when you create the password on a visible-only-once screen that you can copy-paste it from. After you see this screen one time, you’re unable to get it back; if you lose the password part, you have to recreate it.

In the introduction, I mentioned that the name “bot passwords” is derived from the practice of using bot accounts to perform automated edits - but why even bother doing this? It’s all about avoiding spamming recent changes.

Let’s take a look at the recent changes filters on Wikipedia:

The first filter in particular is of interest: “Human (not bot).” In other words, we’re filtering out edits that are tagged as “bot” edits. Bot edits tend to be things like mass template or parameter renames, automated typo fixes, whitespace adjustments, and the like - high-volume, low-impact, low-interest edits that someone who wants to stay current with the wiki’s “actual” changes is likely to consider to be “irrelevant spam.”

To reiterate, there are three different meanings of the word “bot” here:

Sometimes, you may want your automated edits NOT to be hidden from Recent Changes by default. Since most automated tools will ALWAYS apply the bot flag when possible (i.e. when the account making the edit has the bot user right), this means that you must edit from an account WITHOUT this right when you want the edit to be labeled as human. As a result, many editors will have two accounts: one that is their “own” account, a human account, and one that is their “bot’s” account, which will be part of the bot user group (and therefore have the bot user right).

Both the human account and the bot account will have their own set of bot passwords. I hope you are following along!

I’m going to restate the above in a different order:

Most software that performs automated edits, like AutoWikiBrowser, will always attempt to apply the bot flag to every edit, relying on the fact that this attempt will fail when the account editing lacks the bot user right/group (let’s assume these are the same, though of course this could be configured differently in LocalSettings). So to work within this ecosystem, editors will often have two separate accounts, one which is themselves and lacks the bot user group, and one which is their bot, and does have the bot user group.

Pretty much all standard software (at least out of what I use) - AutoWikiBrowser, PyWikiBot, the mwclient Python library (by default) - adheres to this convention of always attempting to send the bot flag, and so it’s often seen as an equivalence that bot flag == bot user right == bot user group. However, these things are all different!

Usually, an application like AWB will want you to give it a user name in the format AccountName@PasswordName and then a password which is just the secret of the bot password. Shown are my saved logins for AutoWikiBrowser - as you can see, I remember the logins for both myself and my bot.

One could imagine a different paradigm in which my logins were RheingoldRiver@AwbAsMe and RheingoldRiver@AwbAsBot, and FlagAsBot were a right governed individually by each bot password - or even just a single login, and a checkbox in the AWB software of “show edits in recent changes” which toggles the addition of the bot flag to all my edits.

While this paradigm isn’t unlikely to exist ever, and this is just an exercise in frustration with limitations of the current system, understanding how it COULD work can help you understand the way it works now.

Now that we (hopefully) understand bot passwords and rights and groups and flags, let’s talk about some best practices with bot passwords!

Name your passwords consistently. For example, you might choose AppNameMachineName. I’ve had issues with passwords with underscores in them, so avoid underscores. I think it’s fine to give your bot account a whimsical name, but for your bot passwords, keep them application-specific and focused - even if you’re only making one single password right now, they have a tendency to multiply. Keep them as disciplined as you would variable names in your code!

Always assign the minimal amount of rights possible. In particular, be careful when allowing high-volume editing; in this case, you should avoid allowing the permission to edit sitewide CSS and JS. If you anticipate the need to edit CSS and JS via the API, use a separate bot password for it.

This has been particularly relevant to me when using SublimeText to edit widgets - the editwidgets right isn’t available via any of the default permissions you can select from Special:BotPasswords. 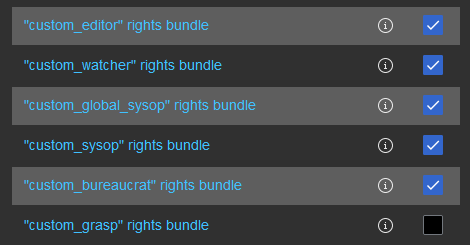 Fortunately, for this situation or similar, there is a very easy workaround! Simply create a custom user group in LocalSettings and assign the rights you need to this group. Make yourself (and anyone else who needs the rights for their bot passwords) part of this user group. Then, in Special:BotPasswords there will be the option to assign rights from one of your “rights bundles” for your custom user groups. Check this box, and you will be good to go!