"Empire Under a Dying Sun" review

Title: Empire Under a Dying Sun

Recommended if: You’re intrigued by a Greek-inspired empire, flawed characters who undergo character development, and an examination of how a dying empire and its citizens deal with its final days

Not recommended if: You’re looking for the characters to find a creative solution to the science-fiction problem of “omg the sun is dying” in a fantasy setting

Stars: I’m not going to rate this one. If you think you’ll enjoy it from my review, you probably will!

Please note, this review contains spoilers about the ending! Deliberately! I genuinely think you will enjoy this novel a lot more if you know how it ends. But, if you don’t want any spoilers, don’t read this review.

Empire Under a Dying Sun is set in a Greek-inspired fantasy world experiencing a calamity straight out of science fiction (literally, if you’ve read for example Andy Weir’s Project Hail Mary) - the sun is dying. With this backdrop, we have four POV characters: A young Empress struggling to find her confidence; her husband, who needs to learn to see the common people as real human beings; an old army general struggling with alcoholism; and his second-in-command, who needs to overcome her childhood trauma at the hands of the empire, and find something worth fighting for other than money. The novel explores these individual stories as well as the ethical dilemmas that arise from limited resources and the dying sun.

What I was expecting was a creative answer to the question: how does a fantasy world deal with this sci-fi problem? Is the sun dying a punishment from the gods? Do they have to give up their magic? Is the Empress secretly corrupt, and they need to overthrow her? Is there going to be a portal to another world? Do they undergo a technological revolution and somehow invent space travel? Is this secretly another Sleeping Beauty retelling, and they’ll put up a protective shield and all wake up in a thousand years once the sun heals?

What I got was…literally none of that. And, honestly, I was goddamn disappointed at the ending. I was all set to give this book a 2* review and recommend no one to read it. But, the thing is, Empire Under a Dying Sun is actually pretty great. The individual character arcs are well done, the Empire itself is in a way portrayed as another character with its own arc in a very cool way, and the examination of how different people react to the end of the world is excellent…really, the only problem was what my expectations were, going into the novel. So I’m here to tell you, this novel is about a dying empire. The empire is going to die. Watch as it dies.

By the way, the Empire letters its armies, and here’s the part of the Greek alphabet you’ll need to know in order for everyone who hasn’t learned it yet from covid (or being a math or classics major in undergrad): Alpha, Beta, Gamma, Delta, Epsilon, Zeta, Eta, Theta.

Note: I corresponded with the author and provided some copyediting corrections, unrelated to this review. This in no way has affected my review. 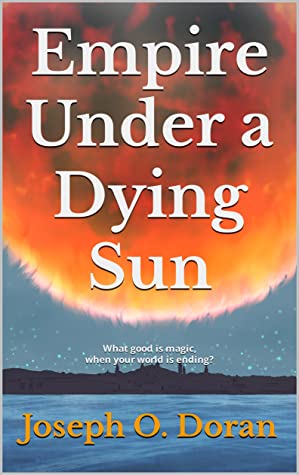