"Cradle of Sea and Soil" review

Title: Cradle of Sea and Soil

Recommend: Yes, it does interesting things & is a cool non-western setting, but I didn’t love it.

Cradle of Sea and Soil is a coming-of-age story with a few twists set in a unique world that I wanted to love, but I only mostly liked. The story has two third-person POV characters: Colibrí and her son Narune, both “Halfborn” with island coyote ears and tail who are scorned by the island’s “Trueborn” humans. Despite their status, both of them are proud fighters and do battle against the Stillness, the deadly opposite of the Flows of Creation; and the halja, unnatural, hollow beasts that spawn from the Stillness. At the start of the novel, Narune is beginning to enter adulthood, and he wants to shake off the stereotypes that come with being Halfborn. Unfortunately, these stereotypes are rooted in tragic reality, and his dreams may be harder to achieve than he realizes.

There were a few issues I had relating to the characters. First, the POV swaps between mother and son didn’t really give me extra insight into their characters; instead, they just interrupted storylines, often accompanied by time-skips early on where a particular segment of action never got its proper conclusion. Certain supporting character backstories were also left unexplained for too long, leaving me confused about why present-day motivations existed. From Narune’s point of view, this could have made sense, but given that we also have Colibrí’s point of view, there’s a certain assumption that we’re omniscient about relevant details, and clearly we’re not. (I realize this is all rather vague, but I’m trying not to leave any spoilers; I’ll be more explicit at the end after the cover image.)

I also felt that some of the exposition was delayed a bit too long - for example, what is a spiritseer? Ohhh, a warden is the opposite of a warrior (this one took me a really long time to figure out). Even after finishing the novel, I’m still unclear on a few of the class distinctions (again will elaborate later). A lot of these issues, I think, stem from the difficulty of the dual-POV in a coming-of-age story. Colibrí’s story doesn’t need to care about any of this, while for Narune’s story it’s absolutely essential. So the author is left with half the space (only Narune’s parts) to tell everything that’s relevant to Narune’s finding his place in the world. And he only gets like half of even that space available, because Narune has to spend the rest of his time with his mom.

In short, I think that while the choice to split POV between mother and son was interesting and unique, there’s a reason it’s not often done, and the entire novel suffered as a result.

That said, there was a lot to like as well. The Caribbean archipelago setting was a vivid world, the giant and beautiful yet deadly forest a tropical counterpoint to the deciduous one in The Queens of Renthia and makes for a compelling world. The coming-of-age story itself is fascinating, because the outcast/outsider trope exists in-world for a real, recent, justifiable, and understandable reason, something that you don’t often see. There’s a strong culture centered around oaths and truth-marks. And the Islandborn’s day-to-day culture is decidedly different from western society - polygamy/polyamorous relationships are common, nudity is common, and it’s not taboo to talk about sex. There’s a group of foreigners that are clearly inspired by the Spanish conquistadores, but currently seem at peace with the native Islandborn.

Overall, I found Cradle of Sea and Soil to be an interesting novel that I’m glad I read, but definitely not a polished masterpiece that I’d recommend unconditionally. I have hope that the sequel(s) will be much stronger, now that the worldbuilding has been mostly completed and the pieces of the story are set in place. 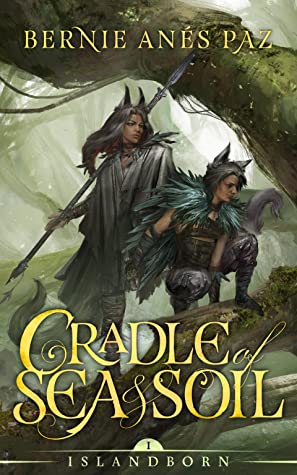 Regarding character motivations - Colibrí’s history with the Cacica, in particular, is explained far too late, given the amount of time Colibrí spends interacting with her. It just doesn’t make sense for Colibrí not to reflect on the fact that they used to be lovers every time they talk to each other. Was this left out for Narune’s POV’s benefit? I’m not sure, but it just made me, like, “okay, what is going on here” when Colibrí’s POV should have lent omniscience.

Regarding class distinctions - It’s incredibly unclear to me what’s advantageous about being a warrior rather than a spiritseer. Is it just that it’s too hard for everyone to be a spiritseer? But then why would Colibrí hope that Narune would want to be a warrior? There must surely be some advantage here, but as far as I could tell, nothing was ever mentioned.