"And Then There Were (N-One)" review

Title: And Then There Were (N-One)

You can read this novella for free on the Uncanny Magazine website. It was also published in issue 15, which is available to be purchased if you prefer.

And Then There Were (N-One) is a delightful, almost warm and fuzzy murder mystery novella. It was originally described to me as “cozy,” which is also a great adjective for it. Sarah Pinsker investigates the death of Sarah Pinsker. The suspects? All different versions of Sarah Pinsker from alternate realities, attendees of SarahCon. While investigating, Sarah is confronted by her “Divergence Points” and forced to question her life’s every decision, relationship, and mistake. But I promise, it’s all done in a delightful, warm, fuzzy, and cozy way! It was a joy to read, and I highly recommend it.

Let’s start with the title. Normally I ignore titles; most fantasy (and science fiction) novels have very same-y sounding titles, and they’re pretty uncorrelated to quality. But And Then There Were (N-One) is such an excellent play on Agatha Christie’s novel with a math nerdy twist, that I was sold pretty much just on the title and nothing else. The premise mirrors Christie’s: a mysterious host invites a bunch of guests to an isolated, coastal island, and then there’s a murder. But that’s where the similarities end.

“Who discovers how to access infinite realities and then uses that discovery to invite her alternate selves to a convention?”

Sarah Pinsker receives an invitation to SarahCon, a convention organized for hundreds of the Sarah Pinskers from alternate realities to meet each other - not all of them, as there are infinitely many alternate realities. She meets some Sarahs who are older than her, some with different hair styles, some from different cities, in different relationships, but many who are similar. She, however, is the only insurance investigator.

Older Sarah waved her program at me. “That’s the name of the first panel. ‘This Is So Damn Weird: Strategies for Navigating SarahCon Without Losing Your Mind.’”

Sarah’s status as the only insurance investigator becomes quite relevant when there is - gasp - a murder! (Or maybe an accidental death.) One of the Sarahs is found dead, and Hotel Sarah asks narrator Sarah to investigate. Sarah knows she’s incapable of murder. Which means all the other Sarahs should be incapable of murder, right? But how much does she really know about every possible life she could have led?

As Sarah tries to solve the (possible) murder while still enjoying her time at SarahCon, the novella explores the idea of divergence points in the multiverse. These take multiple forms and have a varying magnitude of impacts on the Sarahs' lives. What moments were the defining ones in her life? Are those the defining moments in the other Sarahs' lives, too? A trove of philosophical questions is touched upon, but only barely - enough to make the reader begin to think, but not so much as to distract - or detract - from the narrative.

The only criticism I could maybe give this novella is that the ending may not be the most satisfactory; when I finished it, at first I was a bit upset at the conclusion, but the more I thought about it, the more okay I became with the author’s decision of how to conclude. I give the novella a solid 5/5 rating: you can easily finish it in a couple hours, and you’ll have a lovely time. 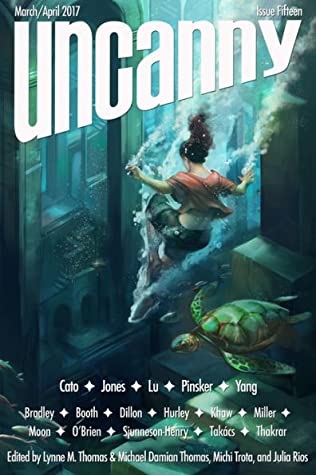