Recommend: Yes! It’s adorable and can absolutely be enjoyed by adults

A Wizard’s Guide to Defensive Baking is a delightful young-adult fantasy novel taking on serious, modern themes through the earnest eyes of fourteen-year-old Mona, a baker’s apprentice. She’s lived a somewhat sheltered but not pain-free life until now: her parents died several years ago, and she now lives above the glassblower’s shop, six doors down from her Aunt Tabitha’s bakery, where she spends all of her time, baking and doing magic to bread.

[Aunt Tabitha’s] housedress is large and pink and has winged croissants embroidered across it. It’s quite hideous.

On the first page of the novel, Mona finds a dead girl in the bakery. The walls that have been sheltering Mona’s life are slowly torn down, and she is forced to confront her city’s underlying prejudice against magickers, a sinister plot emerging from within the government, a threatening force from outside the walls, and the fact that grown-ups aren’t infallible. Themes include societal prejudice, government and police corruption, and military disregard for human life and dignity.

“But as long as they gave us medals, that fixed it, as far as the army was concerned. You expect heroes to survive terrible things. If you give them a medal, then you don’t ever have to ask why the terrible thing happened in the first place. Or try to fix it.”

At the same time, there’s a constant optimism maintained. Mona has to come of age and take part in society in all its ugliness, but this book is kind to her; she’s not forced to hate or become inherently distrustful of everyone around her. It’s not that kind of book. You have to grow up and join the world, and the world is imperfect and contains evil people in it, but the world itself isn’t evil.

He had a chiseled jaw and wavy hair the color of melted butter and dark eyes like cinnamon and broad shoulders and—look, I’m not doing this well at all, he sounds like a pastry when I do it.

While Mona is undergoing this very meaningful coming-of-age story amid a lot of very modern issues portrayed in a fantasy novel, she is also doing magic with bread. It’s all quite awesome. Part of her inner journey is to accept that it’s not “just bread,” and that she’s a powerful magicker in her own right, and her outer journey is to make super creative things happen with bread magic. It’s excellent and fun and a really cool adventure with cool worldbuilding that perfectly complements Mona’s personality.

So despite being thoroughly a Young Adult novel, A Wizard’s Guide to Defensive Baking stands up for readers of any age. Mona is lovely, her story is lovely, and her bread magic is so much fun to see in action. Absolutely worth reading. 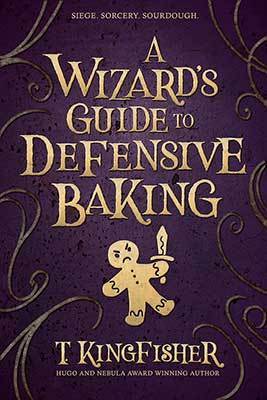