Recommend: Verdict after completing the trilogy: stop after The Palace Job.

Where The Palace Job was incapable of taking itself seriously for more than a couple paragraphs at a time, The Prophecy Con returns with a high-stakes storyline from the start with the fates of nations - and perhaps the world - relying on the back of this volume’s heist. Or, more accurately, heists. Remember “The Love Song Eillenfiniel” that we just spent an entire book stealing and then gave to the elves? Yep, it’s time to steal it all over again. Why? Er…the crew isn’t quite sure, and they need to figure it out quickly.

Traveling the world on every form of transportation imaginable, including an air ship that may possibly become known as the Iofegemet by the end of the book (no spoilers!), Loch and her friends spend most of the story divided into two teams, separately devoted to “recovering” the precious manuscript - and fighting off a comically increasing number of separate pursuers, each with a different reason for wanting to catch them - and figuring out why they’re engaged on this quest in the first place.

The loss of the cohesive-group dynamic from the first book is indeed a loss - there’s a bit too much Tern and Hessler, too much Kail vs Icy, and not enough everyone-together group-dynamic hilarity. There’s also fewer side quests in favor of a more streamlined overall story arc.

In short, The Palace Job was a humor piece with a bit of high fantasy glued to it; The Prophecy Con is a humorous high fantasy novel that prominently features a heist. Is that a good thing? Depends on what you want out of a book. Note also that story is not cleanly concluded at the end of the novel (unlike The Palace Job), so if you’re looking for a second standalone, look elsewhere - you’ll want to start reading the third immediately when you’re done with this one.

A complaint I had about The Palace Job were some minorly racist undertones - The Prophecy Con takes that many steps further. It’s feels like it’s trying really, really hard to not be racist, but it also feels like it fails at this attempt pretty hard. Characters mention their discomfort with racism multiple times, but there’s no reason to bring the topic into what should be a lighthearted, escapist fantasy world in the first place. The amount of attention that the author grants it without really addressing it is almost an acknowledgement that racism holds intrinsic value, and I dislike this.

Overall, I give The Prophecy Con a 4/5-star rating. I was hoping for a clone of the first novel - I wanted something to read to unwind after finishing Stormlight Archive, and that’s not quite what I got, but even still, the racist undertones are enough to knock it down a bit for me. It was still a solid book, and I’m going to finish the series - just with slightly different expectations. 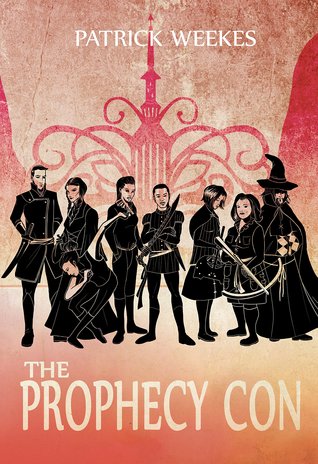 Since reading a bunch of LIS books earlier this year, I notice the roles of libraries and librarians in fiction. The Prophecy Con portrays the (partial) destruction of a library (basement) (Hessler sets it on fire) (not an illusion). Last month I read an essay about the destruction of libraries in pop culture so I specifically paid attention to how this destruction was handled here.

I liked it a lot! Tern mourns the destruction of books when she finds out: “You burned down the library? I love that library!”

Loch (at least says she) doesn’t care: “Which, to be clear, I don’t really care about, as long as Hessler doesn’t get anybody killed.”

Hessler defends himself (a lot):

“It was just the basement,” Hessler said, probably involuntarily at this point[.]

In short, the author doesn’t treat the destruction of knowledge carelessly. He lets a fight take place in the library because it makes a lot of sense for plot reasons, and he milks it for all the humor he can get out of it afterwards, and at no point is it taken lightly.